Stride Health is a health insurance platform for freelancers and gig workers to find the right health insurance plan for their life and get enrolled.
Context
Freelancers and gig workers pay too much for their health insurance.
Anyone who makes less than $60,000/year (~75% of Stride's target audience) is eligible for a subsidy on their health insurance plans. But during onboarding, when we asked users to input their income, more than half of our users skipped the question ended up seeing full price plans.
‍
This made users less likely to purchase. And for the users who did, they were overpaying for health insurance.
My role
I was the first full time product designer at Stride and I was tasked with improving our onboarding flow to get more users their subsidy and saving them money. I paired with 2 PMs and 4 Engineers on this project.

I worked on the project from early research, problem definition, user flows and the final UI,

Increase in number of users who got subsidies

Increase in E2E conversion from onboarding to purchase

identifying the problem
During onboarding, we ask users what for their yearlyincome in order to figure out their subsidy. However, most users were skipping this question and were seeing full priced plans. We're talking about users missing out on an average of $100/month of discounts. We kicked off some research to understand users' mental models on income, and why so many were choosing to skip this step.

Our research pointed us to three consistent themes:
1) Most users they assumed they made too much money
Majority of users assumed that subsidies were "like Medicare", and that they were only available for lower-income individuals. They thought they made too much money, so never bothered checking if they were eligible. This finding  was also backed by scientific evidence that suggested that most Americans think they're middle class, regardless of whether they made 20K or 200K.

3) It's hard for freelancers to estimate their income
Freelancers and gig workers don't get a steady paycheck at the end of the month. Their income is highly volatile, seasonal and comes from multiple sources that changes throughout the year. So it becomes difficult for them to predict how much money they will be making for the year.

Generating solutions and validation
We then generated multiple hypotheses on how we could solve the problems identified. We then went through multiple rounds of white boarding, sketching, and developed some concepts we could start putting in front of users to validate our ideas.
‍ 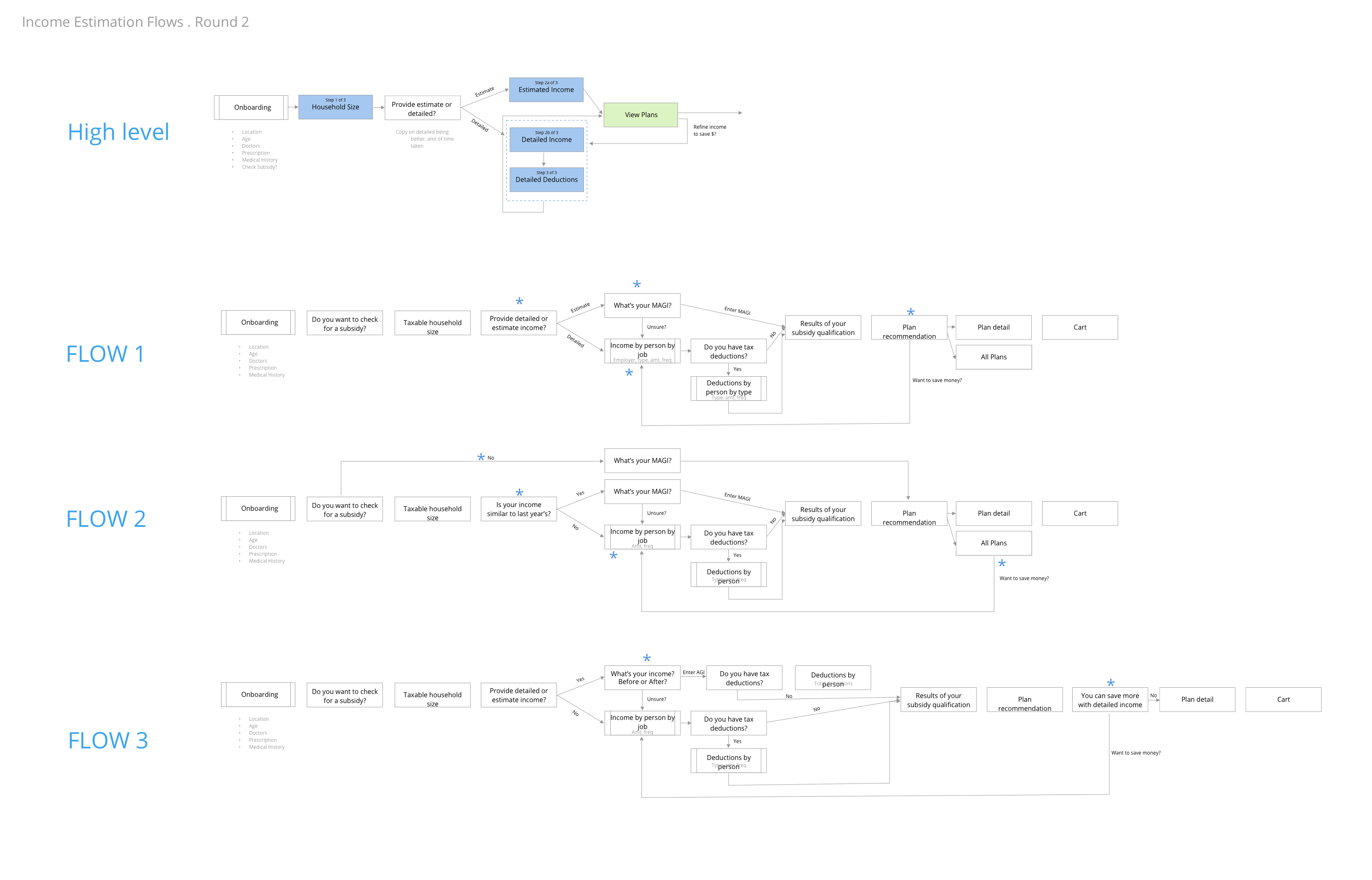 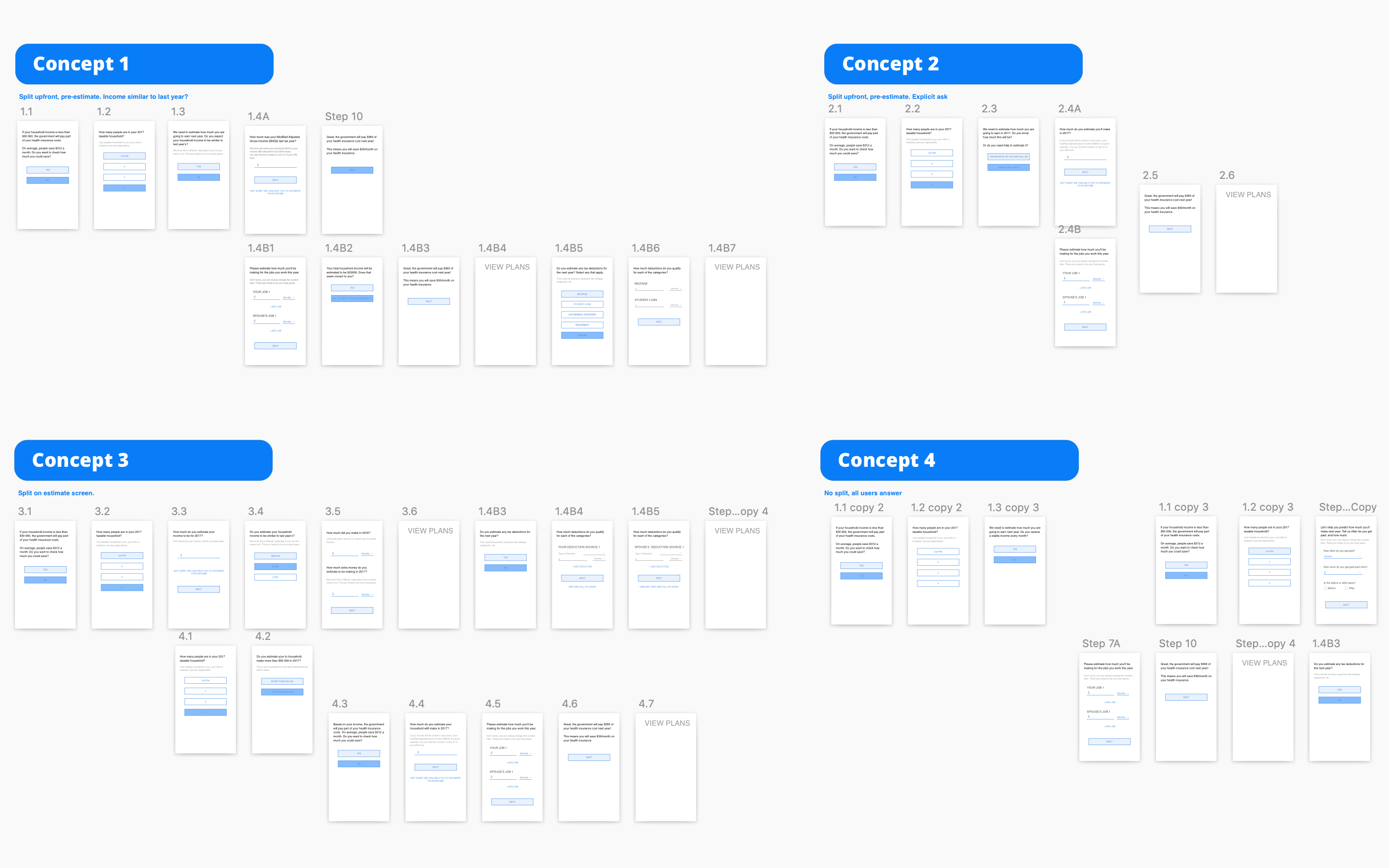 We got positive signals around some of the ideas we tested. We took the best performing prototypes and converted them into high fidelity UI.
Final designs
We designed a flow that allowed users to estimate their yearly income by inputting how much they made for each of their freelance jobs or gigs. This helped us solve the problem of freelancers not being able to estimate their income due to the nature of their work. 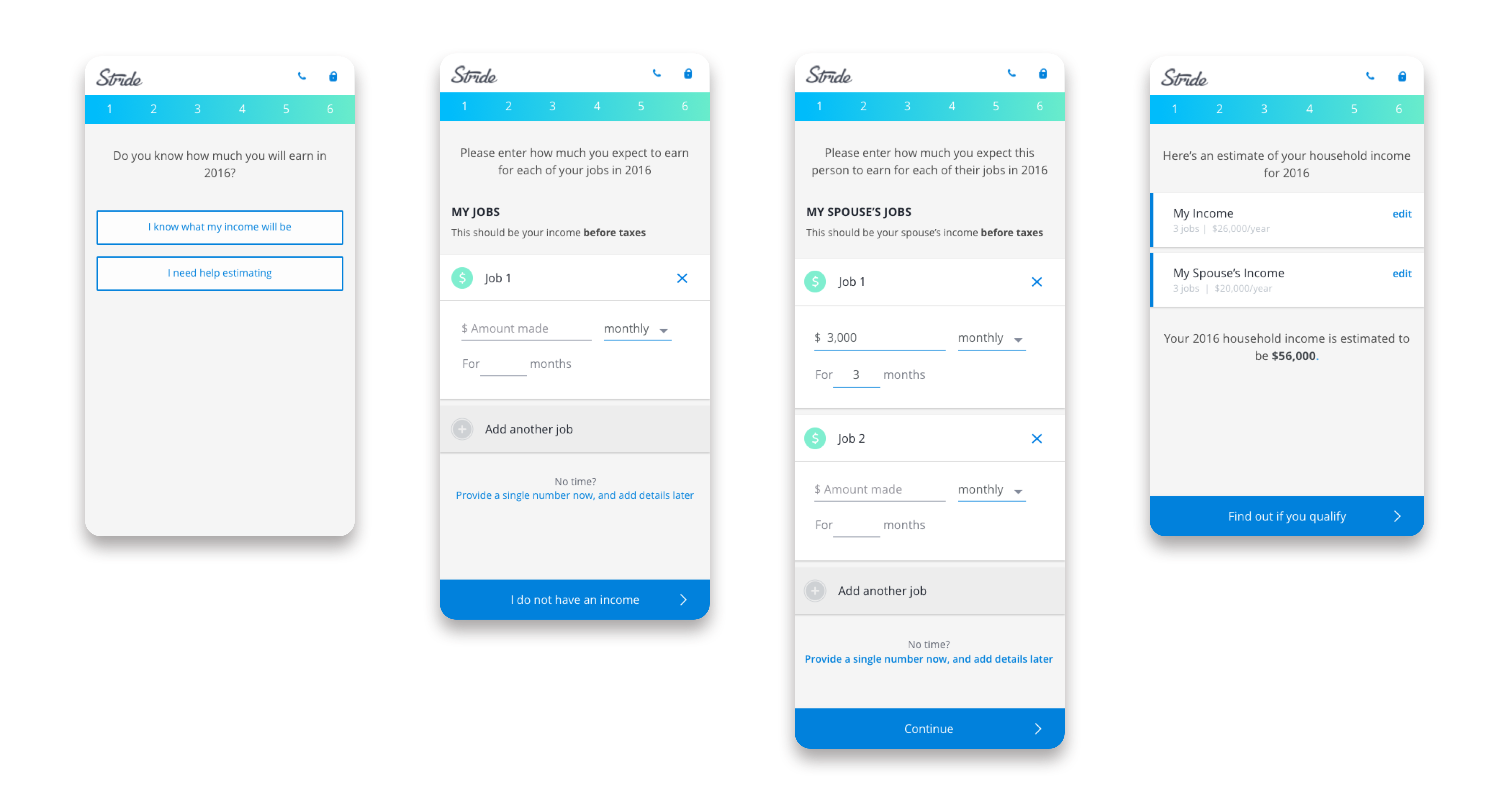 We also added a way for users to to immediately see what their subsidy might be within 500ms of them finishing typing their income. This eliminated the problem of users not understanding how their income was related to health insurance prices. In the follow up research we did after launch, users were able to articulate back to us how income affected health insurance prices based on this design alone. 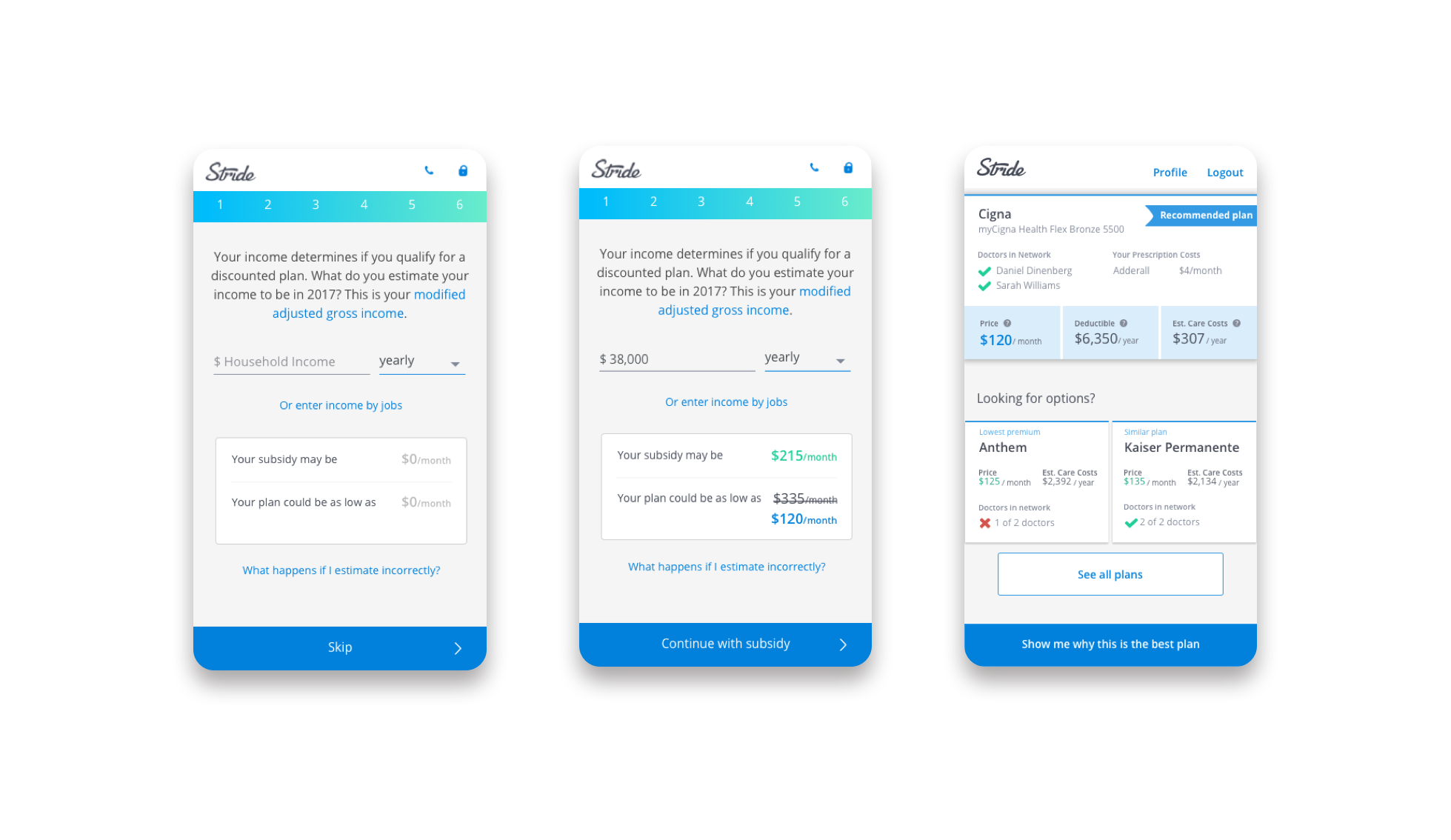 We also remove a step in onboarding that asked users if they wanted to check if they were eligible for subsidies. Instead, we offered the income thresholds as an explicit choice - Do you make above or below $X? Users were able to very clearly anchor themselves to the amount and answer the question. We were able to offer a more targeted experience for all users - high income earners got to skip the income step altogether and lower income earners got a more curated experience. 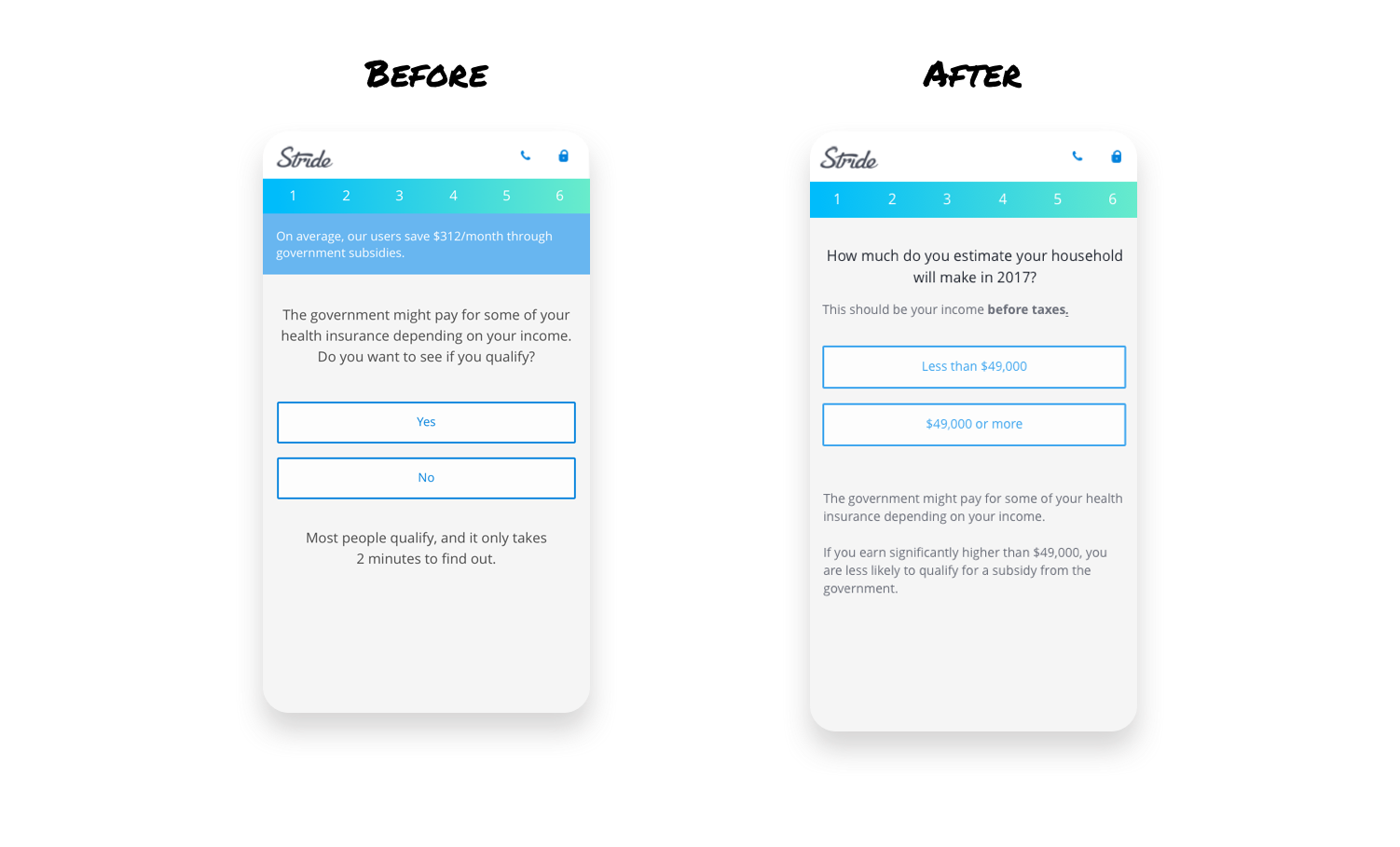 results
This was the most high impact project in Stride history. As a result of this team's work, we were able to increase the number of users who were getting subsidies up by 50%.  Users who got subsidies were 4X more likely to purchase health insurance through Stride! And this work ended up improving our end to end conversion, from onboarding to purchase by 33%!

Increase in number of users who got subsidies

Increase in E2E conversion from onboarding to purchase

Want to see other projects?